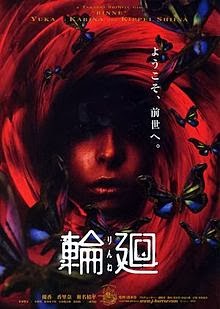 Reincarnation is my kind of horror movie. Being the third of the J-Horror Theater series, this film, like the first two, Infection and Premonition, also delivers a surprisingly amazing story as well as a scary as hell film. I'm actually really glad I've chosen to review all six of these movies this year because I've seen some amazing movies. I mean, wow. Yes, The Sylvian Experiments was terrible, and I wasn't hugely fond of Retribution either, but three out of five GREAT movies makes the whole series literally worth it. Yes, I have one more film to review, the fifth, Kaidan, which just might be coming soon, but I'm so pleased to have gotten to watch so many great horror movies this year so far.

This is a movie I won't spoil. I really think it is the creepiest so far, and well worth the watch. So, I give it a recommendation right away. Go watch this movie. It's so fulfilling, dealing with more philosophical elements, reincarnation (naturally), and fate, a theme which not enough movies truly explore. One of the reasons I don't want to spoil this movie is because there is a twist towards the end that is alone worth watching the movie for. It might be easy to see coming, but man, did it work for me even though I KNEW it was going to happen. Also, the reliance on fate and the past to tell the story here is one to behold. It is a mastery of storytelling rarely seen.

I do, by the way. I really like this movie.

The movie has a simple premise: A director wants to make a movie about the murder of eleven people in a hotel quite some time ago. He has a passion for the murder and wants it all to be perfect. While most of the movie is very slow-paced, used for building tension, atmosphere, and mystery, it works quite well, doing all of those things very effectively. There are flashbacks and memories throughout, mostly provided by those who are the reincarnated souls of those who were murdered in the hotel all those years ago. I seriously can't get over how effective the story is, and how insanely creepy the whole movie is despite its obvious lack of a ton of budget. I like how there seem to be callbacks to other famous horror movies as well, most notably The Changeling and its bouncing red ball and The Shining with Room 237. Because every single movie set in a hotel must have a room 237 reference. It is required by law. If you don't have a reference to it in your hotel movie you shall be beaten until you insert one in. I do enjoy those loving (and quick) references those. They work because they don't take away from this movie, and also because this movie is ridiculously good and can live up to and (in The Shining's case) exceed those other movies.

The faces at the beginning of the movie, the white faces in the trees, are so effective at creating the atmosphere in the movie right away. It drew me in and didn't let go. The visuals are fantastic throughout the movie, and the direction is superb, obviously showcasing a man with a great deal of talent. Oh, its the director of The Grudge, is it? And Marebito, another incredibly well directed movie. Takashi Shimizu, go ahead and take a bow. You have proven yourself as a master of the horror genre.

Oh, and the creepy doll that appears throughout the film? Yeah, I don't like creepy dolls. They freak me out. So, again, the movie is very effective at creeping me out.


Beyond that, this is the kind of horror movie I want to see every time I watch a scary movie. I want to see something original, unique, artistic, and ultimately very creepy. The atmosphere is great here. There's nothing extreme or gory about the movie. The direction is almost as interesting as an actual art-film, and the ending of the movie, with 8mm film interspersed with the actual movie is a grand experiment that really pays off. I don't know of many horror films, Japanese or otherwise, that can cut this deep, intriguing and scaring simultaneously so well. I know I have a ton of movies behind me and a few to come, but this movie right here, this one, Reincarnation, would alone be worth this entire month of reviews. Any better movies than this or movies on par with this one are just icing on the October cake. These reviews let me try new kinds of horror, and sometimes a gem can be a bit unknown or hidden from the public eye. This is the kind of movie I want to feature, one of such high quality and low notoriety, one that shows that horror is neither dead nor even suffering. People need to simply look in the right spots to find the really good stuff.
Posted by Saquarry (Justin Miller) at 5:45 PM

Saquarry (Justin Miller)
Raritan, NJ, United States
"current theory is that he’s an artificial intelligence specifically programmed to be wrong about everything, it seems the only logical explanation"